Keep it Simple, Not Stupid. Writing Copy for the Masses – and for Maximum Effect

Whether you're writing for the Web, posting on your company's social networks, or creating internal newsletters or documentation, the old KISS philosophy is a good place to start.

But if you want content that connects with the masses AND delivers maximum impact, make sure you tread carefully with that final "S." You can write simply without talking down to your audience – and that combination of clarity and respect will go a long way to making sure that your message resonates.

The idea of a Plain Language movement isn't anything new. The Plain Language Association International describes plain language as "a way of communicating that everyone in your audience can easily understand."

The U.S. government has an entire site dedicated to improving communications through plain language. Right here in Canada, the Communications Policy of the Government of Canada, which took effect in August 2006, lays it out in item three of its policy requirements: "An institution's duty to inform the public includes the obligation to communicate effectively. Information about policies, programs, services and initiatives must be clear, relevant, objective, easy to understand and useful."

I will excuse the government's almost tangible opposition to the Oxford comma simply because the statement is so bang on.

In June of 2013, the Canadian federal government launched an initiative to extend plain language mandates to prescription drug labels and safety information. Why? Because plain language can literally save lives.

So when even the federal government gets it, why are so many Web sites and business documents written in language so officious and supercilious that you almost feel the need to parse the text with a monocle and a snifter of brandy in hand?

Because some people think it's more important to sound smart than "be" smart.

It's easy to 'sound' smart. Many years ago, I attended a Ragan Communications conference, hosted by Mark Ragan, Jim Ylisela, and Steve Cresenzo. It was an important time for me because I was getting very frustrated with corporate communications. It all seemed so false – and I was getting too good at it.

We had an exercise to come up with the longest, emptiest biz-weaselly statement we could. Mine went on for two pages and drew a few laughs and some applause. It was corp-comm gallows humour at its finest. We were sharing our frustration with places of work that would actively reward that type of writing.

I found kindred spirits. People who shared my belief that you could write for people. It was cathartic.

I'm not a math guy, but I do remember the concept of inverse proportionality. And, in business communications, the number of empty, jargony, or 'big' words is in inverse proportion to the value of the content to the end customer.

I've worked in business and medical writing. In both, I've seen the desire to jam as much smart-sounding content into a document. It's ego. Plain and simple.

We're brought up from an early age to believe more is better. Think about school – what was the number-one factor in the success or failure of an essay? Word count. We prioritize an artificial word count threshold over the ability to clearly and concisely illustrate and prove a point. So, we learn early on to pack in a bunch of words when one would do. We learn to write passively as opposed to actively.

But that's not how we speak or consume content natively. And with the prominence of social media and texting, being able to write clearly and concisely is an even more valuable skill.
So how do you write simply, but not sound stupid. Or, worse, treat your audience as if they were stupid.

Start by writing how you speak

In general, we speak in clear, casual patterns. One of the big social buzzwords that people cling to is "engagement." But what is engagement, really, but simply having a conversation. So what's wrong with speaking conversationally? You would never talk about leveraging your core competencies or rationalizing your core resources face to face, so why do we do it in text?

Don't 'utilize' big words; 'use' the right ones instead

See what I did there? We often like to slip terms like utilize into our speech when there's a perfectly good word that already exists. And, in cases like 'utilize' we end up misusing it. Utilize has its own purpose and definition – it's used when we're giving an item a use for which it may not originally have (You use a coconut for food; you can utilize it to bash over someone's head).

Other words like peruse (actually means attentive reading, as opposed to the casual connotation we've bestowed upon it) and consent (which actually has a more negative implication in that it's used when we agree, but may have reservations about the item to which we agree) are frequently misused.

Yes, you'll get the point across. But why not be relevant AND correct?

I have a personal bugaboo about certain words in this category. We have the habit of taking perfectly good nouns like, strategy, and try to make them into a verb like "strategize." While ol' Merriam-Webster says that the word was first used in 1921, I still prefer to blame Survivor's Jeff Probst for bringing it into the cultural Zeitgeist.

Weaponize, Americanize... they're OK words, but come across as jargony when used in text. Why say, "They strategized on behalf of the company," when "They devised a strategy for the company..." is much less clunky.

Make sure you know what you're saying

Irregardless, conversate, for all intensive purposes. All wrong. Affect/effect, accept/except, further/farther, i.e. versus e.g. – they're often misused in text. And while most people

Some quick advice? If in doubt, find another way to say it.

I know it doesn't rhyme, but if you're not sure if something's correct or the text feels odd, it's usually better to trust your gut and make the change.

Try to make the grade

If you use Microsoft Word, get to know the Flesch-Kincaid readability scale. It's not perfect, but it does provide you with a general idea of what level you're writing to. The Flesch Reading Ease test also gives you a score that explains the reading level (90-100 = easily understood by an average 11-year-old student; 60-70 = 13-15-year-old students; and 0-30, best understood by university graduates.

You access this in Word under the Spelling & Grammar tab and performing a spelling and grammar check. You'll then get a Readability Statistics list. For this article (a few words ago), the stats are below: a 9.5 grade level and a 53.4 reading ease score. 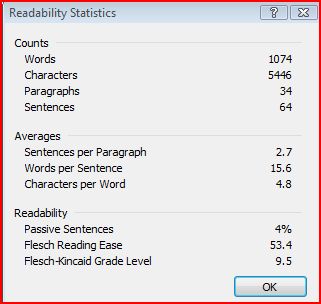 Equally as important is the four per cent passive sentence level. I'm not one to say all sentences should be active. Passivity brings some creative flair and can help the readability of your articles. Just don't overdo it.

It's time to unlearn our past and embrace the idea of writing like a person for people.

In upcoming blogs, we'll discuss specific tactics and goals. But for now, I'll leave you with some great examples from the Plain Language Association International on how much better writing can be with a little rework.

Plain doesn't have to be boring. It doesn't have to appeal to the lowest-common denominator. Plain can be dynamic, attracting, and – most importantly – actually helpful to your staff and customers.

What are your thoughts on business writing and plain speech? The comments, as always, are open.