It's hard to keep a stiff upper lip when inside you're ready to snarl and snap. But for businesses dealing with legitimate trolls, it's what you have to do – and you only have to look at professional golfer Lee Westwood's recent Twitter rant to find out why.

Before we get into this, it's important to know what a troll is and is not. We prefer to focus on the actual Internet trolls – the mindless and malicious who anonymously post inflammatory content for the sole purpose of sparking a reaction. And then, of course, continuing to fan the flames until it rages out of control.

What a troll is not is what too many people on Twitter erroneously attribute the title to: someone who disagrees with you.

We've discussed ways to keep the trolls at bay by establishing a framework of respect-based rules in a previous post. Westwood's recent example could be exhibit A, B, C... actually most of the alphabet in what not to do.

If you're unfamiliar with the story, please take a moment to read the National Post article. Or the 'mea culpa' article from the Ottawa Sun.

And here's a screen grab of Westwood's last few Tweets during his three-hour rant/battle with the trolls. 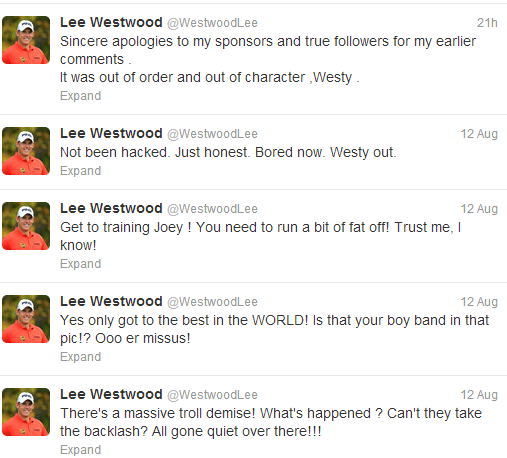 Notice the last Tweet. That, in common parlance, is the "Oh S***" moment. That very second where you realize, "Maybe I went a little too far and this is going to affect me in my pocketbook." Westwood's fear is losing sponsors over his self-indulgent rant. For business, that moment is about losing customers. And, as much as we'd all sometimes like to take trolls to task, it never, ever reflects well on us.

At best, you reduce yourself to their level; at worst, you come across as a supercilious bully. Either way, where's the value to you? Your customers? What made Westwood's rant even worse was that he couldn't let sleeping dogs lie – he continued to egg them on and actually encourage the behaviour.

Now, the Ontario Ombudsman partially disagrees (as you can see in his Tweet).

Recently he's been in the news for exposing a troll as allegedly being a member of a police force. His opinion is that it's better to "out the trolls" as opposed to engaging with them.

I agree with the last half of the statement. The first part? Not so much.

After all, this could have been handled behind the scenes. If he has the information that he says he does, then forwarding it to the proper authorities would have had the same effect – just not the same public impact. At best, you've 'outed' a troll; at worst, if your information is in any way incorrect or unable to be proved, you've set yourself up for a libel suit based on defamatory behaviour.

Whether it's business or personal, I hold true to the same belief in how to handle trolls:

The greatest negative that being so quick to assign the troll label has is that some valuable information or opinion can be lost.

Commercially, you may have a customer who is legitimately livid because of something your organization has done. Dismissing that response outright causes you to lose an opportunity to fix a challenge. Trying to diffuse the situation and maneuvering the conversation to a polite discussion may help. "I'd like to address your concern, but we don't accept this kind of behaviour/language. If you'd like to discuss this further..."

Then give them an out. An e-mail address, a FB page, or a future Tweet. And if you've already set the ground rules mandating respectful discourse, you're ahead of the game.

People are smart. And people are increasingly social-media savvy. They can spot a troll and they can separate fact from fiction. Trolls with agendas are the easiest to discount, so don't feel badly about merely stating the truth and ignoring the behaviour.

And the idiots? The ones just trolling for trolling's sake? Ignore them. You can reiterate your position on discourse, but never engage. As Westwood showed, all it does is put you in the rough.

In business you're going to have to cross a troll-infested bridge at some point. Whether you ford that stream effectively or sink into the mire is up to how you handle it.

Your thoughts? Do you see any value in Westwooding the trolls? How would you/do you handle it?

How do you handle trolls on your business Website?

Should I delete critical messages?

Should I ignore critics?

What can we learn from Lee Westwood?

What is the best policy for dealing with trolls?